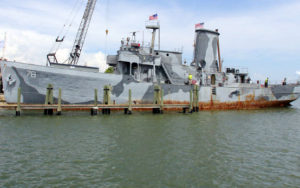 The Mohawk Veterans Memorial Reef is sunk in 90 feet of water approximately 28 miles off of Sanibel Island, Florida at Charlie’s Reef.  She is 165 feet long and features guns and a smokestack as well as her enormous photogenic propeller.  Unfortunately, several storms in 2016 toppled the superstructure which makes penetrating the engine room difficult but the deck and below deck are still accessible and provide many hiding places for several different species of fish.  Enormous Goliath grouper are prevalent on the bow and stern, many times hovering around the buoy lines or near the propeller.  Large barracuda are also plentiful here.  There have also been several whale shark sightings at the Mighty Mo.  This dive site requires an Advanced dive certification or higher.

The ex-USCGC Mohawk was built in Wilmington, Delaware, in 1934 as an icebreaker. During World War II, the tough little ship served well and proudly in the Greenland Patrol, where she protected vital allied shipping throughout the war. Other highlights of her war career include fighting in 14 U-Boat engagements and rescuing hundreds of allied sailors who had been torpedoed from the frozen North Atlantic. She is credited with being the last ship to radio weather information to General Eisenhower before he green-lighted the D-Day invasion. After the war, the Mohawk was converted from steam power to diesel and functioned variously as a lightship, University of Delaware research vessel and Delaware Bay Pilot Boat.

She was sunk on July 2, 2012 at 12:36 PM roughly 28 nautical miles off of Sanibel Island on Florida’s southwest coast, creating the first Veterans Memorial Reef dedicated to all U.S. veterans. The reef will be the new home to untold numbers of fish and other invertebrates living in the Gulf of Mexico.

H2O Offshore Adventures is Southwest Florida’s premier offshore diving and fishing charter by far! We hold all required Federal permits and take our guests on the adventure of a lifetime. Call Captain Ant today to discuss your next adventure!